When you love freedom you give freedom

Hiding or deleting something that does not correspond to the political opinion of the majority, even if it is in reference to house rules, is censorship. And censorship is the opposite of freedom. And when I see what was censored, it is obvious by whom the store is infiltrated here.
Let’s stop playing theater, the store is neither for freedom, nor is freedom lived here. It is only pretended.

Actually, it was auto-hidden based on community reports.

I was one of the people who flagged it as inappropriate.

You can have your (honestly, stupid) opinion. Just don’t be rude about it and spam it onto completely irrelevant support requests.

And when I see what was censored, it is obvious by whom the store is infiltrated here.

By whom? Please name, I’m curious

Today the society is completely devided. Even the basic rights are disputed. Freedom is not displayable. Freedom is binary. This is not about apps without ads and protection from trackers. It’s about freedom. Hammer it into your heads.

Freedom is not binary. Your freedom to refuse to get vaccinated limits the freedom of those who are immunocompromised to go outside and live their lives.

But that is the last I will say because I will not be dragged into a long discussion with someone who has trouble keeping China and Japan apart.

In my post there was nothing about vaxx. You just switched the topic to get the general opinion on your side.

Such a shame Discourse keeps the edit history and allows us to confirm just what you did type about the “covid hoax”, doesn’t it? First smartphone, a little unsure about some things - #5 by ecxod 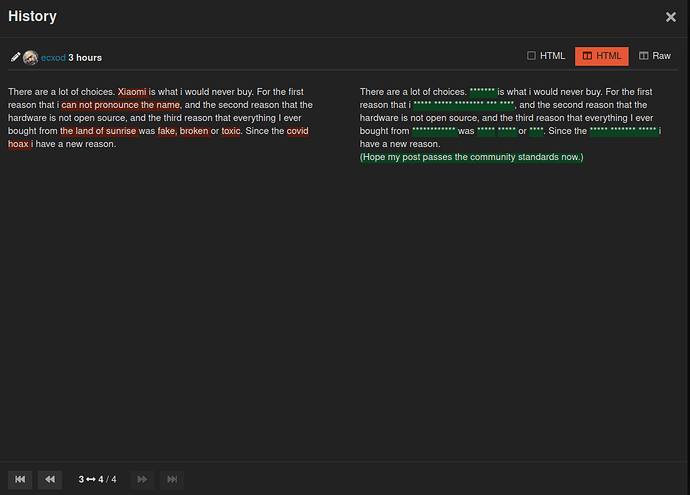 the store is neither for freedom, nor is freedom lived here. It is only pretended.

The store is for “free software.” That is different. There is also a preference for user privacy, to some degree. Free software has a precise definition. When it comes to free expression of opinions, it strays from that and becomes difficult. You are correct: censorship is used here, and in the store. It is applied inconsistently. Some people get away with pushing their own agendas, subtly spamming their favorites, or insulting others. Some are suppressed. I’d use the L word, but that’s probably over the line. Also it’s impossible to simply categorize a group of people and bots, accurately. I feel your frustration.

Yes, and it nothing about vaxx. :))
Its about the chinese or not chinese debate.
Stay humble.

The Free Software Definition written by Richard Stallman and published by the Free Software Foundation (FSF), defines free software as being software that ensures that the end users have freedom in using, studying, sharing and modifying that software. The term “free” is used in the sense of “free speech,” not of "free of charge

Free speech is the freedom of expression.
Please do not redefine everything to make it fit with your ideology. I am 55 years old and i lived 24 years under a dictatorship, it is hilarious to see people teaching me what freedom is.

Couple of notes here, not that my two cents bear a whole lot of weight.

It’s not just some dictator on TV spewing a bunch of obvious lies, there would be a parade of “experts” all corroborating the official narrative. Anyone attempting to see through those lies would be targeted for defamation to discredit their character. In the event of failure they’d be brought up on trumped up charges and thrown in jail if not outright murdered. Anything to keep them from causing disillusionment.

You can’t expect someone that comes out of an environment like that to suddenly start trusting government like none of it ever happened.

Additionally, try to understand more about what motivates people. The assumtion here is that freedom is good, that freedom is right and that people try to do that which is right so all that need be done is ensure people know what constitutes freedom and they’ll do just that because it’s the right thing to do.

The problem here is that people only pay lip service to goodness and righteousness. In reality most people care not about what is good or right, but what they perceive to be in their best interests.

Most people are incapable of surviving on their own, they need to be accepted as a member of a particular social group. So if a person were confronted with, call it the truth or call it revelation of wrong doing, but that truth conflicts with the conduct of their social group they will side against the truth in order to maintain status in that social group as a means of survival.

Again, this is because they are incapable of surviving outside of that social group and conducting themselves in a manner that is not in accordance with the group’s standard of acceptable behavior means exile.

Of course, they would never admit to that. Few, if any, would even admit it to themselves as doing so would cause considerable cognitive dissonance. Instead, they’ll fight tooth and nail to defend falsehood and wrongfulness as truth and righteousness. In the event their arguments become indefensible they’ll either run away or turn violent in an attempt to defend themselves against the pain that comes from acknowledging the truth.

Sure. Ask RMS how well his exercising his free speech rights in areas away from software worked out for him.

Then ask how free you are to use “free software” in any way you may wish.

Jesus said to him, “I am the way, and the truth, and the life. No one comes to the Father except through me.

Holy fuck why are we bringing Jesus into FOSS 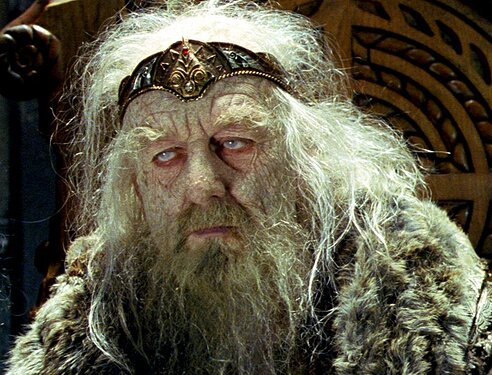 I just want to say that every single comment(out of 3 in total xD )I left on instagram either got deleted, or got a very nice amount of hatred. So I’d say that this site aint that bad

Probably, but maybe not for the reasons one might think. I’m not convinced that it’s really about greed and power. It seems to me that the displays people make along those lines generally tend to be for the purpose of concealing their fears and frailties. The bully, as they say, presents an image of power and strikes the fear of great retribution, but this image is actually meant to frighten potential threats away, to keep them from probing deeper where they might find the frightened insecurities that lay beneath.

The accumulation of material things and the degree to which those things grant a level of control over others is a means for one to frighten their challengers away and prevent them from discovering or proving to others the truth as they believe it to be; that they are entirely unworthy of their existence. Of course, they are worthy and have no need to prove it. They know not that their challengers only present the challenge in the first place because they are, themselves, making an attempt to prove the righteousness of their own existence by disproving the that of another and they only need to do so because they too are afraid of what the truth may be.

This is why it is said that love is the answer. Love, as they say, tolerance and acceptence. Because the refusal to tolerate, accept and embrace the righteousness of the existence of others brings into existence a Pandora’s Box of debilitating problems that can be solved through no means other than a return to the aforementioned.

That is a much more complex question and I don’t think it is the right place to discuss it.

Well having hepatitis c in public also limits healthy non immunocompromised people from going out and living their lives as well due to the fact that if they even sneeze on a any surface, it can stay active for days and even weeks. But we don’t force people with hepatitis c to put anything in their bodies more than they already have, or make any kind of legislation to force them to either.
And even if we did, it doesn’t make it Constitutional to do so.

If you want to live on a planet where you are free from other human beings and all the pros and cons that come with them, then you should of been born on venus.