As the title says, how do I prevent Google Play from proposing updates to F-Droid installed apps?

Google Play will for instance update Orbot to a non-recommended version. And in any case i want to keep updates restricted to the repositories where the apps were originally installed from.
Above will allow me to auto-update all apps from both F-Droid and Google Play

Maybe GuardianProject puts the same apps on both stores, hence it can be updated, but that’s not true for all the other apps.

Test this your self, pick any other app, install in F-Droid an older version, then try to update it in Play store.

I also am hoping for a workable suggestion. I’ll download from F-Droid but the Play Store will alert me that an update is available. If I’m not careful I’ll update from Play Store.

What app? Try a random app that you don’t care about…see my post above. I bet it doesn’t update…

I have 4 phones. On each phone I have 50-70 apps from F-Droid. I have almost as many apps on each phone from the Play Store. It’s a chore but I check both F-Droid and the Play Store daily for updates. The Play Store is showing Tutanota version 3.43.1 is available and alerts to update. F-Droid has version 3.42.2. If I don’t update on Google Play today, tomorrow it’ll still be telling me that the update is available. On the Play Store app’s update page there are apps showing available to update that I only update through F-Droid. I have several obvious problems. The most obvious one is that I download too many apps from Google. The second… I have too many phones. Third… I have a great amount of leisure time. Okay. Maybe that’s not a problem… The main problem is that there is no way to make Google stop showing updates to apps downloaded through F-Droid. A problem F-Droid has no way of fixing.

Don’t use the store that annoys you then?

You can disable notifications for updates there, globally, just go and update from time to time.

I pay for a yearly subscription to Tutanota but I keep it updated only through F-Droid. I bought NetGuard through the Play Store. (A very nice app BTW) I update Marcel’s app through the Play Store. I like being notified when an update is available. If an app has new permissions that do not contribute to the function of the app I may or may not update. It’s no bother to receive notifications to update. I just wish Google had a mechanism in place that could turn off update notifications for individual apps. The notification setting is global, you receive all or none. Google will let me know when NetGuard has an update. I’ll grab it. Google will let me know when Tutanota has an update. If the update is available on F-Droid I’ll update it there. Otherwise I’ll hold off. If I’m not careful I’ll update apps in the wrong “store”. (Don’t question or try to figure out why I do things a certain way. For years my wife has been trying and failing to understand me. Just love me in my dotage. Sentimental, that’s me.)

Google will let me know when Tutanota has an update. If the update is available on F-Droid I’ll update it there.

Otherwise I’ll hold off. If I’m not careful I’ll update apps in the wrong “store”.

Again, read above, at this moment in time, except Briar and Guardian Project repo apps… NONE CAN BE UPDATED FROM A DIFFERENT STORE THAN THE ONE THEY WERE INSTALLED FROM, because Google has programmed Android in such a way, for security reasons.

BUT, the fun part, Briar and (I guess) the Guardian Project apps… are the same apps so it does not matter WHERE you update them from.

/PS: sorry for the caps

You just taught me something! You are totally correct. I did not know this. But one of my phones is acting differently. I use Totanota as a prime example. All four phones show the app was downloaded from F-Droid. Sure enough, as you describe, I can’t update the app on three phones through the Play Store. Hooray. BUT on the fourth phone (Galaxy S7 version 8 Oreo) even though the app was showing as downloaded on F-Droid I was able to update it from the play store to version 3.43.1. Now when I go to the phone’s Settings, Apps, Tutanota, it now has changed to show that it has been downloaded from the play store. It’s the only phone of the four that permitted a Play Store update. I’m not going to try to solve that mystery. You helped me a great deal. My life will be easier, I’ll need to only worry about that S7 and it’s Idiocracy. Thanks.

Open F-Droid, go to Tutanota, open Version details if you can, take a screenshot or tell me what it says there. 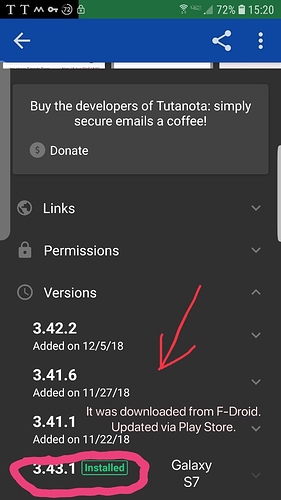 Another pic, another phone… 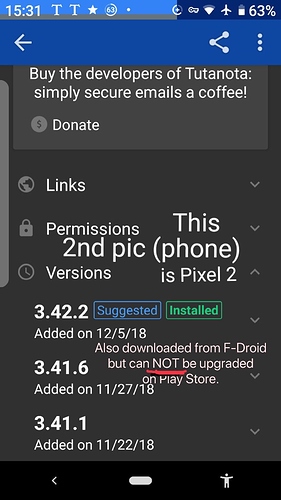 Ok, so, as expected, the explanation is still the one above, you can’t upgrade from different stores.

Now, what do you actually see?

To prove my point, on the Samsung S7, go to F-Droid settings, I bet “include incompatible apps” is turned ON, right?

That’s why you see both there, on the S7, now, toggle that OFF and surprise… F-Droid versions disappear… because they are… umm… incompatible… different signatures.

FYI, Tutanota stores all the e-mail on the server, you can simply uninstall your app from Google, reinstall latest (yes older at the moment) from F-Droid and carry on.

You are right, right, right! S7 did have “include incompatible versions” toggled on! I toggled it off. And, as you say, F-Droid versions disappeared. I’ll uninstall and download it from “our” store. Thank you, Thank you! You’re so smart.

Detach the app from the Play Store using Titanium Backup (assuming you are rooted).

Years ago I rooted an S7. For months everything worked fine. Then I tried to unroot. I bricked it. You ask “Why?” did I want to revert back. Because I’m an idiot.
I’d root one of my present phones but I do not have a computer. I have a Note 8, Pixel 2, S7, Note 4 and iPad. If I had a means to do so I’d root the Note 4. I know vastly more about smartphones and their capabilities now.

For the exception to the above statement, see the information about Reproducible Builds. These apps include the developer signature in the F-Droid version and should be able to be cross updated. According to the previous comment, it appears that Tutanota is built this way.

If you enable the Guardian Project repository (which contains Orbot and associated apps) the APKs have the same signature as those on Google Play, so they can be cross updated.

If an app from F-Droid has the same signature as the version on Google Play, there is nothing the F-Droid developers can do to prevent Google Play from offering to update it.

I learned that the hard way. Lol. I had “Include incompatible version” toggled on. It certainly caused me some confusion. It’s toggled off now. If the signatures are the same, does it matter where the update is downloaded from? I download from F-Droid if they are different and avoid the PS even if they’re the same. But in the scheme of things does it matter?