RepoMaker does not upload files

I have added my first repo in RepoMaker. Set up the git storage with ssh key is done. But RepoMaker isn’t uploading the files ?
In ‘share’ option is only the button for adding the storage available.

How can I upload / publish the f-droid repo ?

I think the issue is, that I don’t have an LogIn screem as shown here when I’m starting RM 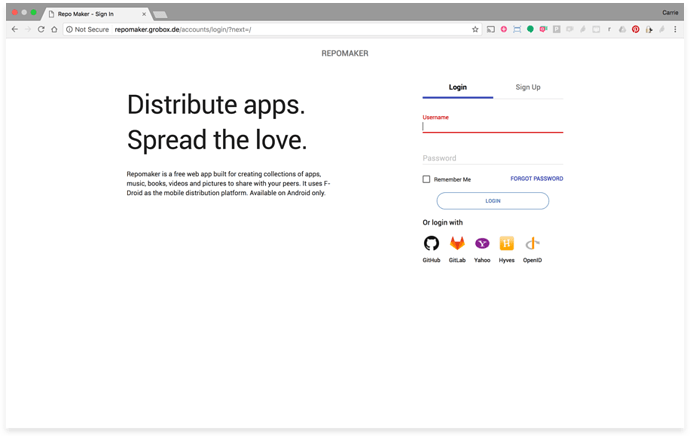 OK, seems I’m the only one here which is using, or better trying to use RepoMaker. Sad. Seems to be a nice tool, but …

The source repo has some issues mentioning this is in need of maintenance, yes

What’s your use case here? Deploying a repo?

Yes, I want create my own f-droid repo

I never used repomaker, I don’t host a repo, but afaik you don’t need all that.

Just fdroidserver and host the files.

@Izzy have any quick info at hand?

I have tried all tutorials from Izzy webpages. None is working.

The command line procedure with fdroidserver is working. But if there is a nice GUI for that, I think it should work.

Whut? My tuts don’t work? First time I hear that. But with the second paragraph you write

Well, that’s what my tuts are about? Ah, I guess you refer to the article on Repomaker itself. That was written quite a while ago; as Repomaker is currently unmaintained I have no idea if it still works.

Maybe you give Setting up a simple binary F-Droid repo a look. It also mentions a Docker solution (created by @TheLastProject), where you’d just need to drop-in your APKs and the setup takes care for the rest. Your GUI then could be the file explorer

Maybe you give Setting up a simple binary F-Droid repo a look.

OK, as I have written before, I have created a repo with this. But how can I add screenshots ?? For this action I can’t find any tutorial

And an other question: Which icon is shown in app overview or as app icon ? ic-launcher or ic_launcher_foreground or ic-launcher ?
Because 3 of my apps are show the right icon and 3 don’t show any icon

But how can I add screenshots ?? For this action I can’t find any tutorial

Ah – that’s correct, that was planned as the next part of the series. OK, a short “how-to” on that as I’m unlikely to write up that next part within the next few days:

Placing graphics and support for multiple languages rawly follows the structures of Fastlane, as described in my Fastlane Cheat Sheet – with the difference that it’s split up a bit (at least the way I use it with my repo, to avoid duplication):

From those places they are picked up automatically when you build an index. If you want to use those text files, you must make sure that the corresponding parts are removed from the app’s YAML file, which otherwise takes precedence (e.g. for full_description.txt to be picked up, the *.yaml must NOT have a Description: set).

As for the icons: I’m not sure which one is picked up (if you place an icon.png in the fastlane structure as described above, that should be the one used IMHO). I just know the only supported formats are PNG and maybe JPG (unless something changed since I’ve learned that), so if you e.g. used WEBP that might be the reason it’s ignored. 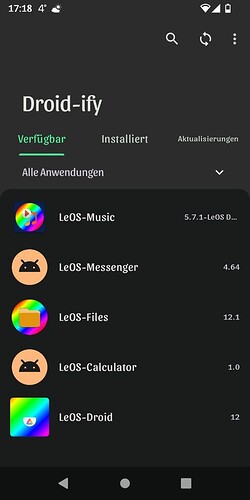 PS: Let me explain the logic, maybe it’s easier to remember then.

Hence the division: placing text files into metadata/ so they can be parsed for creating the index – and placing pictures into repo/ so they can be distributed directly.

I was going as shown here 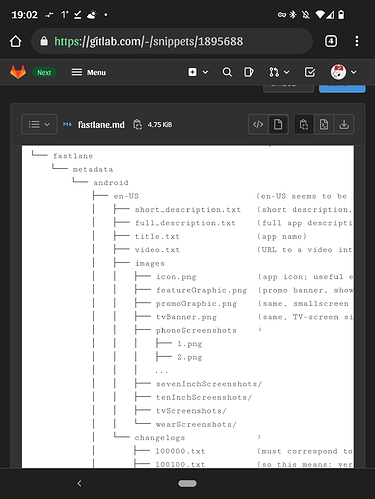 Ok, I will try it the other way. Will keep you updarex

That’s why I wrote, quote:

Placing graphics and support for multiple languages rawly follows the structures of Fastlane, as described in my Fastlane Cheat Sheet – with the difference that it’s split up a bit

(emphasis added). Fastlane structure as in the cheat-sheet is for placing it in the app’s repo. F-Droid’s internal structures rawly resemble that, but with a slight deviation (as described).

I will try it the other way. Will keep you updarex

i think the problem is that there are 2 repo folders and I don’t know which repo folder I have to use.

I have placed metadata and all related files in /repo/repo folder. Still no working

can someone post the folder structure of a working repo please ??

I have no idea what you did now, as the screenshot only shows part of it. But that the icon folders are on the same level as the metadata one looks plainly wrong. Did you place a metadata folder inside repo/? It doesn’t belong there. The structure should look like this:

which repo ?? there are 2 repo folders. please see screenshots

I’m using fdroidserver on Mint 18.3 and yes I have heart that it’s an old version.

How can I update to latest version on Mint or ubuntu ?
fdroidserver Version (1.1.10-1~bionic).

EDIT: I have tried on Ubuntu 21 with
fdroidserver version (2.1-1~impish) and config.yml

But nothing changed, Still no description, icon, screenshot

The command ‘fdroid deploy’ is OK or not ?