What does the name F-Droid stand for?

The about page is scant on the details about the “F”.

What does the name F-Droid stand for?

Since early days, before the bearded robot was shaved, F(-)Droid has “stood for” FOSS for 'Droid, with inconsistent use of the dash, or is that a razor blade or body part?

F-Droid is dedicated to Free and Open Source (FOSS) software on the Android platform. Here you will find news, reviews and other features covering all things Android and software-freedom related.

The FDroid Repository is an easily-installable catalogue of FOSS applications for the Android platform. The server contains the details of multiple versions of each application, and the Android client makes it easy to browse, install them onto your device, and keep track of updates.

Source code for the application is on Gitorious.

F-Droid is a bearded robot with a passion for Free and Open Source (FOSS) software on the Android platform. On this site you’ll find news, reviews and other features covering all things Android and software-freedom related.

You can also follow F-Droid’s microblog on identi.ca at fdroid@identi.ca, or discuss and get help on IRC in channel #fdroid on FreeNode.

The F-Droid logo is a modification of work created and shared by Google and used according to terms described in the Creative Commons 3.0 Attribution License.

F as in free software:

“Free software” means software that respects users’ freedom and community. Roughly, it means that the users have the freedom to run, copy, distribute, study, change and improve the software. Thus, “free software” is a matter of liberty, not price. To understand the concept, you should think of “free” as in “free speech,” not as in “free beer.”

This is also what the F in FOSS or “Free and open source software” stands for (in other words, nothing to do with how much it costs). FOSS is a halfway term that tries to accommodate for both the “free software” and “open source” groups/movements, but is also criticized as not being clear (I agree with that assessment and am disappointed that this term sees wide use in communities that ostensibly value free-software principles).

I kinda agree, however,

“FOSS” was bad enough a term, but who would agree to “LOSS” software in English? “FLOSS” also sticks in the teeth…

A problem with GNU and FSF (i.e RMS) has always been a dictatorial insistence on using particular wordings, in the way most humans don’t, but most computers do. Related to this, but on the opposite side, is advertizing and language that humanizes the machine Android, and conditions people to interact with (very) “artificial intelligence” as though human. The latter has exploded in popularity; the former, not so much. 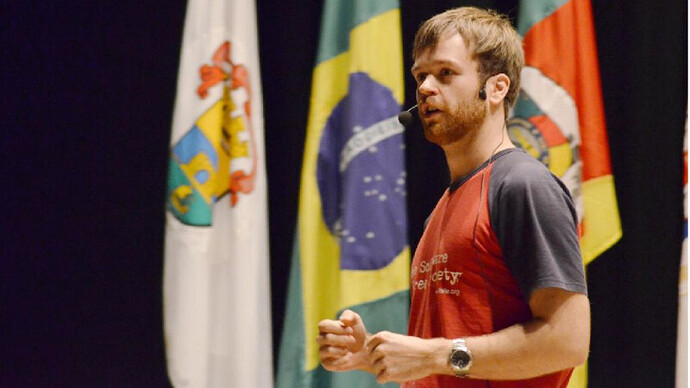 In our fourth birthday publication we are interviewing Torsten Grote, who explored Free Software alternatives on smartphones for the FSFE as early as 2012....

Thanks. Interesting throwback. Btw, does Torsten Grote talk about what F stands for in F-Droid in that interview? If so, I missed it.

I also want to know