Many users will not realize that the browser they are using will never get security updates and will continue to use it for months before they notice.

Totally agree. Apparently FDroid devs don’t want to ship it as an update. They need to go trough uninstall flow so no data migration. 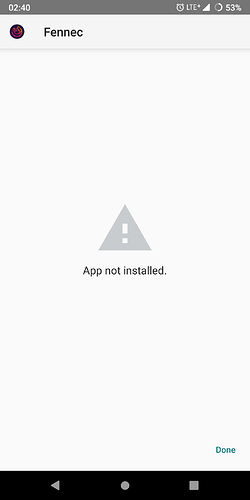 The best solution is an update over the old one. Same package name, same key, different app name. FDroid devs don’t want this.

The 2 apps proposal was me attempting to find a compromise.

This is really confusing. Old code + new name. Two apps with same ID and name but different keys. People will be wondering why they don’t get the update and will use an insecure browser.

This was about the link Bubu posted ONLY!!!

F-Droid will build and sign and the app will update as usual.

. Apparently FDroid devs don’t want to ship it as an update. They need to go trough uninstall flow so no data migration.

No, same answer as above

Then there’s the people who might want to use both at the same time, eg. one for personal sites the other for non-personal???

Just throwin it out there.

It does seem like the original Fennec and this one have two different use cases.

Fennec was a code name, that browser (code base) is no longer developed, has evolved, has been replaced.

eg. one for personal sites the other for non-personal???

Use the older not developed anymore, not patched anymore for personal or?

Because there’s no Fenix ESR.

I’m curious, will this version have the same limitation on the available extensions that Mozilla’s official Play Store build has? Or will it allow all extensions previously supported on Fennec?

will this version have the same limitation on the available extensions that Mozilla’s official Play Store build has?

There is a lot of work in adding extension APIs. Most extensions in IceRaven are broken.

Fennec F-Droid - will RIP soon on my device similarly like Firefox. New code base is a total disaster and no freedom. It have better to kill yourself then trying to live with this catastrophe next generation (for degenerates) browser from Mozilla.

According https://github.com/fork-maintainers/iceraven-browser/issues/63 there are few add-ons broken. All add-ons I used on fennec work on iceraven.

Fennec F-Droid gained some awareness among people who care about freedom. It’s mentioned in variuos articles, discussed in forums, etc. It has a positive image overall.

Firefox for Android, on the other hand, is believed to be slow and laggy, so Mozilla gave a GeckoView-based version a new name and advertises it as “all new” (remember Quantum? same tactic).

I think we should stick with the Fennec name, so that those who read an old article could come to F-Droid and install it. Don’t make people think WTF is Fenix, how it’s related to Fennec and why the latter is gone.

Problem is: Fenix ain’t Fennec. Firefox for Android users were angered by the fact that the new Firefox is so different form the old one - in both good and bad ways. And since there is no feature parity between both browsers the migration was and still not fully possible. I think we should stick with the codename approach and call it Fenix to reflect these changes and differences between the two.

On the other hand: If we want to build a “brand” with the Fennec name we should have some kind of long term strategy regarding the name. I often promote Fennec F-Droid during CryptoPartys and similar events but I’m not too sure how much the “Fennec” name is stuck in anyone’s head. Maybe we should discuss this more publicly via Mastodon? Maybe have another (including some thoughts from this thread)?

Can we do something about the hardcoded URL suggestions? It’s super annoying that the Firefox keeps suggesting lots of US-centric and non-free sites/services whenever I type something - even though I have never visited these site. This has been bothering me for years now.

Could you make a patch?

Could you make a patch?

I don’t know. First things first: Where would one submit that patch?

I don’t know. First things first: Where would one submit that patch?

I’m curious, will this version have the same limitation on the available extensions that Mozilla’s official Play Store build has? Or will it allow all extensions previously supported on Fennec?

The upstream ticket tracking this is here: https://github.com/mozilla-mobile/fenix/issues/14034 (well, one of many tickets)

When that’s supported upstream it should be easy to enable this in the f-droid build (or is enabled by default). Mozilla’s plan so far seems to be to allow loading arbitrary extensions only on nightly/dev builds.

81.1.1 is not marked as the current version yet, upgrade manually if you want to. This is the last chance for Fenix haters to disable automatic updates.

Thank you, this is excellent! Upgrade went fine here as well.