Orbot incompatible only versions are uploaded to f-droid (Lineageos 14.1 not supported anymore) 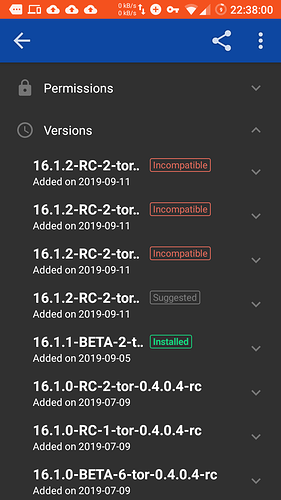 Why is this dropped while LineageOS 14.1 patches are still upstreamed and e.foundation support the most secured phones actually available (N7100, N7105, I9300 I9305) that are being worked on for Replicant 9?

Not sure why you’d assume that ONLY your device’s architecture should be supported, there are others too around.

FYI, touch that arrow on the right side for each version…see the red text…

Orbot incompatible only versions are uploaded to f-droid

BTW, these are not in “the F-Droid repo”, but in the GuardianProject one, different thing.

The last version working for this device is the one reported: 16.1.1-BETA-2, which is why report was specific for it. More recent versions are incompatible, even if suggested. If there is guidelines to better report this, or report elsewhere, please advise accordingly.

Why are they incompatible?

@tlaurion Look closer at the three Incompatible versions in your opening post. They all have the same version number, they are simply variants of the same version, which target different devices.

Ignore them. The variant ‘Suggested’ is the variant for your device.