Maybe this is not the appropriate site to post this, but here are some great Android app developers, so could be useful.

XMPP seems to me a great protocol that is so fragmented that is not easy to use for many people (let’s say “normies”). The problem o fragmentation results in many apps, many of them not maintained and most of them old looking; moreover, almost none of them is cross platform.

Here you can find a list all many clients for XMPP: https://xmpp.org/software/clients.html

Therefore, I ask for a modern looking, easy to use and if possible cross platform program. If it would be only for Android, I would be also happy. If someone wants to work on this or has any idea or opinion, don’t hesitate to answer this post. Thanks!! 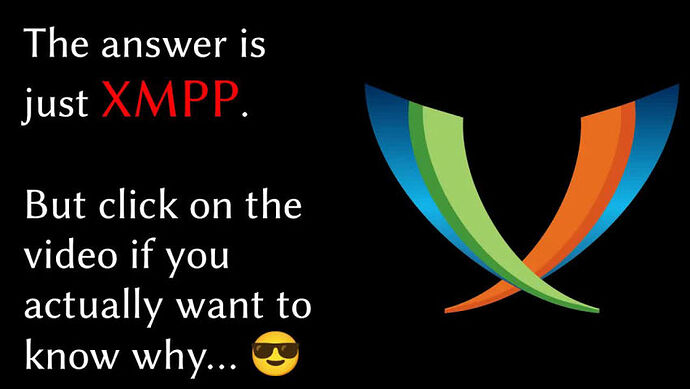 Matrix vs. XMPP: Which is Better for Actually Secure Messaging? (Unlike...

Matrix and XMPP are the two (only) actually good, end-to-end encrypted and secure messaging software standards. Matrix is probably a little easier to use, but XMPP is realistically a better standard for reasons I explain here. Regardless, Matrix and...

Conversations for Android, Dino for Linux distributions.
Both support OMEMO encryption which is the “best” in XMPP. The best in terms of features / security.

For Windows there’s Gajim, which supports OMEMO too, not so pretty though. And also Pidgin, which is multiplatform but only works with OTR or PGP encryption, AFAIK OTR is fine in terms of security, but outdated (only for text and 2 people conversation)
OMEMO or PGP is recommended, but PGP is hard to use.

Yes, there are many clients, but none that people using GAFAM interfaces will accept, because “they look old fashioned”. The main success of Matrix, in my opinion, has been due to Element app, which is cross platform and “modern looking”. I like more the XMPP protocol for many reasons, but such an app lacks.

Yes, there are many clients, but none that people using GAFAM interfaces will accept, because “they look old fashioned”

Facebook app on Google Play: 2.3 stars (out of 5) and 5,000,000,000+ installations. Users think it sucks but still use it because of the network effect, not because it has a superior UI or anything.

For Windows there’s Gajim, which supports OMEMO too, not so pretty though.

Gajim has an in-progress UI overhaul called Workspaces, similar to Slack and Discord.

Users think it sucks but still use it because of the network effect, not because it has a superior UI or anything.

I think users still using because of the aforementioned questions.
Did you tried make a voice call between clients availables on market?
I could make it works between conversations(android) and dino(linux), nothing else. Gajim would be a strong candidate for windows but it doesn’t work.
Each server have your own config. I needed make a second account because a server don’t allowed me send messages to people from another server.

I’ve noticed Conversations have substantial number of forks in repo. Any reason to prefer one over original?

OMEMO or PGP is recommended, but PGP is hard to use.

I thought PGP is not recommended because it lacks forward secrecy property.

I would recommend sticking to the original Conversations app.

For awareness there is also Xabber and aTalk, both available on F-Droid.

Blabber has a modified interface, more rounded and motifs instead of plain colors, as well as more settings to configure.
With Monocles happens exactly what you said.

I’ve noticed that Conversations apk at Google Store is 12 MB according to Aurora but the one in f-droid is 32 MB. Where does this difference in size comes from or is it just displayed wrong?

With one remark that quicksie is from the same author like conversations. So it is not a fork but a different product.
The Google version from google play uses google libraries and the f-droid does not. So it could be the reason of the size difference.

Also F-Droid packages the emoji font, while Play brings it separately as a component iirc.