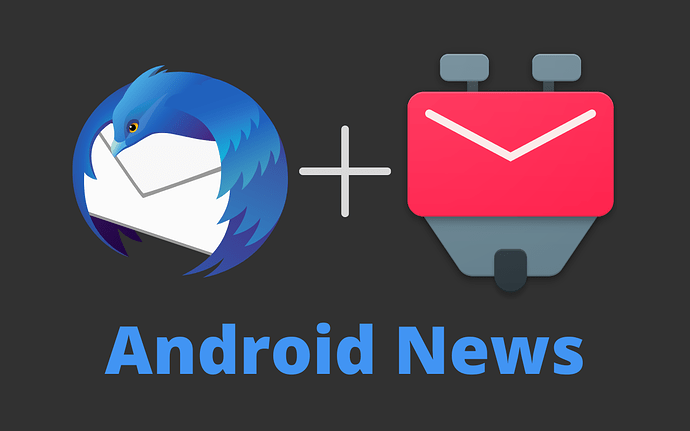 Revealed: Our Plans For Thunderbird On Android

We're thrilled to announce our first steps on the road to delivering an outstanding Thunderbird on Android experience.

Don’t be surprised by the rebranding

This is not exclusively to inform the F-Droid staff, who are the ones who are most aware of Gitlab.

Y U can’t into joke?

is this good or bad news?

In the end, only time can tell, but I like Thunderbird on my computer and this will allow the K-9 Mail developer to work fulltime on K-9 Mail without having to hunt for donations. It will also get some extra developers on the team. I’m optimistic, at least.

So will K9 Mail on F-Droid turn into Thunderbird down the road?
I mean that’s what I understand at least, Am I correct?

The name change? Maybe/surely… does it matter?

Kind of I’m just curious because down the road when I update K9 Mail that one day it will Thunderbird instead? Or will we have to uninstall K9 Mail eventually then install Thunderbird?

Don’t think they’ll abandon K9, users will be mad if they have to backup/restore

OK thanks I hope your right.

According to my information, the K-9 app will stay on GooglePlay/F-Droid and continue to receive updates, while thunderbird will be a second app. From a technical point of view, K-9 will become a “build flavor” of Thunderbird. No guarantees, though – maybe the plan was changed in the meantime.

Not sure it is a good news. Thunderbird is a part of Mozilla and uses the same privacy notice: Thunderbird Privacy Notice — Mozilla

Mozilla’s browsers contain thousands of trackers impossible to remove. Years ago, I had a chat with one of Firefox’s developers. Basically, the gist of his response (to my question about removal of trackers) was - IMPOSSIBLE! There are so many of them intertwined with the code that one would need to literally start from ‘ground zero’ to build an entirely new browser.