I need a launcher recommendation

I would like to replace the native android lanuncher. I tryed every launcher in F-Droid, but not one was suitable for me. Now I am using the neo-launcher. The functions are great, but it seems to be slow and buggy. I need a launcher with several desctops, like the native android launcher. If someone reccomended me a laucher, it would be great.

I think Neo Launcher is still at quite early step at development. You might want test Omega Launcher, which is now coming as Neo Launcher if I have understood it right (work in progress and Omega backup files won’t work at Neo). Or fork of Omega, LeOS launcher.

Thank you for answer. Both launcher, you recommended, are not in F-Droid. Should I just download them in Github?

For omega there used to be their own repository, but seems to be discontinued (and like seen, project goes forward as Neo Launcher).

For LeOS Launcher, I checked from developer and it’s ok to share repo here too, so…

Thank you for the links. I wonder, why both apps are not in the main F-Droid repository? Are they save and up to date?

Well I use LeOS GSI, so obviously I trust the dev. I think main reason for LeOS Launcher having it own repository is that it’s mainly made for LeOS GSI and that repo has some other LeOS specific apps too. Also dev of Neo Launcher visits at LeOS GSI telegram group once in a while.

About Omega, it’s now at f-droid, but name is now Neo Launcher, as you can see at github address, as you see that at time those messages were written they talked about Omega.

neo launcher is not in the official f-droid repo but in the izzyondroid repo, and apparently there are no plans to include it in the official repo: F-Droid main repo inclusion? · Issue #47 · NeoApplications/Neo-Launcher · GitHub

Ok, my bad. I have IzzyOnDroid repo and didn’t check was Neo Launcher from there. But on the other hand @sandoxy probably also has izzyondroid repo cause has already Neo Launcher installed (this was part of reason I thought Neo Launcher is at f-droid repo).

But if idea of using those repos is out of question, I’m sure someone will suggest some other launcher which is available at d-droid.

I can recommend OpenLauncher and Omega Launcher.
I have been using these 2 for a long timw now. They do not lag, and they fit my needs too. Have multiple pages/slides.

I installed the Leos launcher and like it very much. It`s fast and seems to have no bugs. I tryed the OpenLauncher, but it crashed from time to time. So I had to remove it.

Thank you for your reccomendations!

LeOS is based on Omega, which itself is based out of another launcher. Anyways, too many redirects, but I will still suggest Omega over LeOS.

Maybe I didn`t pay attention, but is there a repository to omega launcher? I thought it changed to neo launcher.

Ahh yes, I had forgotten that. My apologies.
Actually I have it since it was Omega, a fork from AOSP Super.

Why not switch to KISS and end your searches for the perfect launcher already?

KISS seems to be very popular and it is for sure s nice launcher. I tried it several times, but I recognised, that I need icons to tip on. The letters on my keyboard are small and when I`m walkind and trying to type an app name, I tip on the wrong letters and therefore cant find the app.

Agreed. I have it too, but I use it once in a while only.

OLauncher (and OLauncher Clutter Free if you want to tweak it more) has been hands down the best launcher I’ve used. It’s a minimalist text-only launcher, but that’s what I prefer using to keep the visual noise on my phone to a minimum. Might not be your jam, but worth checking out.

I like my launchers complicated and wildly customised, so I use Launch Time 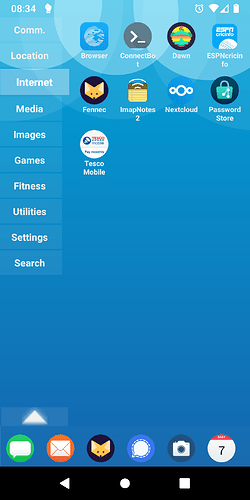 Try this newly released Lunar Launcher. Hope you will like it.

Thank you for your reccomendation, but I have some problems with text-only launchers, like I mentioned above.