I can't find the F-Droid app on Android TV, once I install it

I have tried to install F-Droid on my Android TV by sideloading it the same way I did on my phone, but at the end I can’t find the app on the menu.

Everything works and it says at the end that it has been installed but when I look at the menu, it’s not there.

I’m sure that installing apps from unknown sources works because I’ve succesfully installed an other app and it appears in the menu.

What can I do?

I’ve seen that the app for some reason is installed as a system app not a normal app… so that is why probably it doesn’t appear in the main menu.

Why is that? How do I change this?

but the app isn’t mine… so this is for the developers, isn’t it?

Indeed , it’ a nightmare to update apps with f-droid hidden so deep, @hans @hotlittlewhitedog I’ve uploaded 2x minimalist patches for both android TV & Dex basics https://gitlab.com/oF2pks/fdroidclient/-/commits/1009000-1.8, that should not interfere regular smartphone use.
Look well in androidTV (Pie) AVD (AndroidStudio), but sdk28 is required for Leanback/17 minimal compatibility. 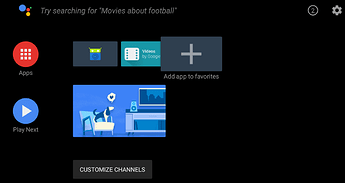 @portata @mato can you give a try and comment ?

EDIT: I forgot the new

@oF2pks I don’t understand, what should I do? Try and reinstall the F-Droid app after your what you’ve commited? Did your changes get already implemented by the F-Droid developers?

Indeed: reinstall the debug one.

I’ve uninstalled the official one and reinstalled it, but the same happens.

So, it’s a browser similar to the Puffin Browser? It works on Samsung TVs too? Because you can’t install an apk on Tizen from what I know.

I don’t know which debug version you are talking about,

Because you can’t install an apk on Tizen from what I know.

Both debug-fdroid_client and jQuarks should appear well and works (well?) on AndroidTV and SamsungDEX (not Tizen OS).

@portata (@hotlittlewhitedog) what I don’t get with my androidTV emulator is that android property
packageInfo.lastUpdateTime is wrongly reported.

Can some verify that, on real androidTV, with @xgouchet F-Droid Stanley app ? This property is also used by F-Droid client https://gitlab.com/search?utf8=✓&snippets=&scope=&repository_ref=master&search=lastUpdateTime&project_id=36189

(There are many other AOSP unsupported features in androidTV e.g. https://stackoverflow.com/questions/50981739/android-tv-getting-last-used-apps-through-usagestatsmanager)

btw, I will update apps_PackageInfo and ClassyShark3xodus for androidTV soon.

Hi @oF2pks,
I don’t know if it was your question but today, I noticed that F-Droid was still on my Android TV (real box for TV: Xiaomi Mi Box S), even if it’s not possible to see it in the list of apps displayed by the launcher.
The app was displayed in Kodi Addons ^^
So install Kodi, to launch it

Kodi team found the way to display them.
In fact F-Droid is installed on the sd-card.
And it works, I installed Stanley, updated F-Droid 1.6 to 1.8.
Stanley works and I can see all the apps.

@oF2pks @portata
I installed Sideload Launcher (from Google Play Store for TV), it’s free and easy to start any apps