Hello.
This thread is about Emerald Launcher, a lightweight launcher that supports almost every Android phone. I believe that F-Droid forum is a good place to make discussions, so please share your opinions, suggestions and anything else here.

First of all I love Emerald. Coming from Nova, I expected it to be another 5 minutes of experimenting followed by uninstall. But it stuck and I’m enjoying it!

Icons (without packs)
I’m not entirely sure how icons work but if I have no icon pack (using “Default”) many apps have an icon, many have a generic greenish icon. When I do install an icon pack many apps have an icon but some less mainstream apps lose their icon because the pack doesn’t have it.
Could Emerald default to the app provided icon? Or does that not exist? Or am I missing something, doing it wrong maybe?

Gestures?
Now I’m aware feature requests may not be what you want, keeping Emerald as simple and light as possible. That said, I’d love to be able to use gestures, for instance swiping instead of having to tap the category thing.

Hello, David.
Nice to hear that you like the launcher. I can say that icons in any icon pack should be shown without these green androids. The default icon pack probably shows only adaptive icons on Oreo. I couldn’t test it on Oreo, so I thought that all icons on Oreo are presented as adaptive. It has to be fixed. About the other icon packs I can say that there was an error which is caused by “Transform icon” option. If you disable it, it will work well. The fix is already done, but has not been uploaded yet. About suggestions and gestures… I’m always open for suggestions if their implementation makes sense. I understand that it’s difficult to switch categories on a big screen, but at the same time I’d like to keep it simple, so gestures have to be considered and discussed. I’m going to implement custom placement of various ui elements(bars, buttons relative positions, hiding and adding items) if it won’t hurt performance. That should be a good compromise. Also, you can swipe on the category thing left or right to switch categories, but that’s probably not what you’re looking for.

Thank you for considering my suggestion. I tested the swipe on “the category thing” and it works (sometimes the menu pops up, but it does also switch categories).

In found two other little issues I think.

edit: checking github and will add there if needed.

@davidsmit, please could you share the screenshots of default icon pack issue?

I also noticed after reinstalling my S8 that the default settings on default dpi make my device look like a geriatric phone. This could probably turn people away

After reinstalling my S8 to Android 7.0 I noticed the default icon pack issue does not appear. Probably Oreo 8 (or “Samsung Experience 9.0”) issue.

This is an Oreo issue. I rewrote the code for adaptive icons support and there is also (probably) a fix for runtime permissions request. Hopefully it works. Sadly I can’t test it.

When I go back to Oreo on any of my devices I will immediately test and report.

New to whole f-droid thing. Installed this launcher. Loved it. Gives me screen space and many customization options. Only thing I am missing is placing of the icons and search bar. How do I get it to the bottom of the screen?
This how it looks as of now. 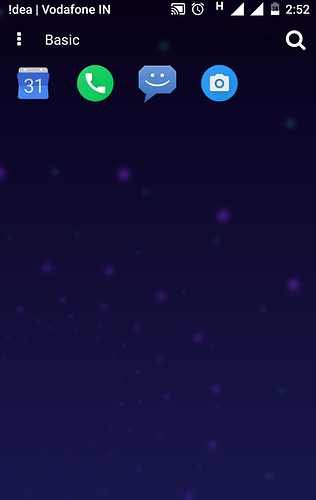 Your screenshot shows basically the same screen as mine. I’m not sure what you are missing. The search option is on the top right.

The dock maybe? You can add icons to the dock by long-pressing them and selecting the dock option. If it’s not that, maybe you can elaborate?

The whole thing, which is icons and search bar - can I get all of that to the bottom of the screen.
Adding it to the docking, makes it completely unusable. Cant even select those icons when added to dock.

I’ve gone back to Oreo on my S8.
Can’t build my own apk at the moment to test it, though. Is there a possibility of having a beta/alpha in fdroid?

I did find this intro screen difficult to read (on both android 7.0 and 8.0).

@anil, these features are planned, but I can’t say exactly when it will be implemented.
@davidsmit, thanks for the report, I’ll check it.

Hi,
This morning I installed this application, I soon discovered it wasn’t really what I was looking for, so I supposedly uninstalled it. Now I keep receiving a icon ( F-droid Robot ) in my notification bar that informs me that the app. is waiting to be installed. I don’t want to re-install it again… how can I prevent this from happening ?
David

Hello. You can delete the downloaded apk from Android/data/org.fdroid.fdroid/cache/apks/f-droid.org–1. It won’t show again then.

Hi,
Thanks so much for your quick reply, I figured out a somewhat different method, I went into settings under Apps, found F-droid… simply deleted the cache and so far anyway, everything’s good.
David