Personally, I get little benefit from app icons, rarely look at screenshots, prefer to minimize data/bandwidth required, and get annoyed with frequent “click to show” more details (except Versions detail).

This and response partly motivates this survey: Blank app icons - #11 by justsomeguy

How much do you agree or disagree with the following statements?

Photos and icons are so cool bandwidth does not matter (0: Strong Disagree, 10: Strong Agree):

Click for more is annoying, but an exception for loading icons and screenshots is Good (0: Strong Disagree, 10: Strong Agree):

Compromise used with my repo: screenshots are resized to max 350px on their small side and stored as JPG with quality 70%, featureGraphics to 512x250 and same JPG compression. This significally reduces bandwidth (as screenshot size usually drops from around 1 MB each to around 30 kB) while still keeping the pics available. Many users (myself included) prefer to see what to expect – before installation

I recently did that for my site. Made all screenshots from 1080x1920 to half size, and any with too much content cut into third size.
The page has 32 images and loads under 2.8MB.

Meanwhile you can go to a blog and the little header graphic alone is 4MB.

Images as a whole seem to be something many overlook for some reason, yet they add up extremely quickly and it isn’t all that hard to easily optimize.

I optimized the GnuCash documentation package a while back and reduced the size distros were shipping every update by 28MB!

Just a PSA:
jpegoptim, optipng, imagemagick and the like are you friend, please use them.

But are they also resized? Say I’d send in 4k screenshots. Would they be “downsized” – or just “optimized”? In my repo I do both, and @SkewedZeppelin reported the same (“half size”). I never checked, but it would be sane to cap their size – be it at 720px or 350px at the small side.

Icons and screenshots for anything, but especially apps, are extremely important. Not my opinion, but hard science.

The easiest and quickest way for a human to digest information is most of the time consuming the information in a visual non-written form.

Apps without icons and screenshots are basically meaningless. Nobody wants to read over 3000 app descriptions, when you could just scroll by and look at screenshots, which maybe takes 100th of the time required to read a short description and comprehend it. Especially, if it’s not translated for non-English speakers.

Icons are so important, because it’s easier to visually separate the different apps, when you, for example, have a list of apps open on your screen. Imagine 20 apps on your screen are shown and none of them have an icon. Reading all the titles every single time is an extreme chore for the human brain, at least compared to viewing a simple icon.

Loading screenshots has become somewhat tiresome (for example, you sometimes need to clear the app cache manually, which should never be a requirement) and that’s really bothering me. To know an app, I need to see the screenshots. The best description does not help, because if the look of the UI (showable on screenshots) is strongly indicating a bad UX, I do not even want to download the app to test it. Or maybe it just looks terrible and it’s impossible to use it, when it looks like that.

Seeing an app without visually depicted information, mostly in the form of screenshots, does more or less “not exist”.

I agree to a point.

Then again people chasing “only pretty pictures” was what drawn users to closed source proprietary apps and services. See… “nobody wants to read app descriptions” so they just install the “pretty” ones and then complain about privacy and rights, right? 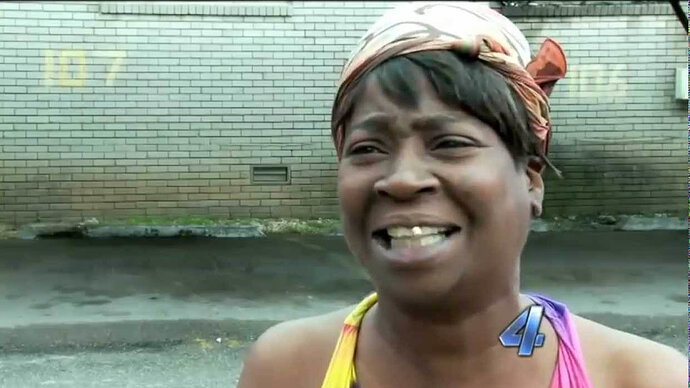 Sweet Brown / Ain't Nobody Got Time for That

Sweet Brown is a pseudonym used by Kimberly Wilkins, an Oklahoma City resident who was interviewed by local news station KFOR News Channel 4 after evacuating from her apartment building that was set on fire. Her emphatic testimony of the chaotic...

See… “nobody wants to read app descriptions” so they just install the “pretty” ones and then complain about privacy and rights, right?

That is indeed an issue and I see your point!

However, I think the root cause of the issue is the attitude these people have in general. So, just removing screenshots won’t make them suddenly think about such topics.
On the other hand, adding the most beautiful app still won’t work if their favourite proprietary what’s it’s name Facebook integration is missing, beceause F-Droid tries to focus on FOSS apps and apps with such integrations aren’t first class citizens.

One would need to fix the people and their attitudes. This can’t be done by limiting the F-Droid store, to, for example, being less convenient with screenshots.

I personally use F-Droid, because I think about such stuff and I care about privacy, but mostly about security, which is naturally implied from open source software. I still want to see screenshots, because that’s the best and easiest way to transport information about how the app seems to work. (Videos would be even more accurate, but that again takes longer to deliver, so pictures are the best middle-ground.)

That said, pretty pictures just remain pretty, as long as the app is downloaded and actually holds to that promise. If the app downloaded is not as pretty or useful, it’s an even a bigger disappointment to the user.

Additionally, a lot of proprietary apps indeed have a straight up better UX, than free alternatives. Of course, that’s not always the case, but more often than not, if comparing free and non-free apps with the very same purpose and goal.

For consumers, it’s often a question of caring about privacy or security vs. having the best UX. And just because the former seems most important, it does not allow for UX capabilities to be simply ignored or toned down.
UX is extremely important. The best app with the best features on earth will be absolutely useless, if (almost) nobody is able to use it.

There are some places you want things to be “pretty”, or at least know what it looks like.

Consider the options for launchers on F-Droid - the majority of them are described as some variation on “a minimalist/lightweight/simple launcher” and have mostly similar feature sets. That’s not a knock against them - the feature lists are intentionally limited, the descriptions are accurate, and they have different implementations to suit different users. It’s just not really possible to easily communicate these differences to a prospective user without some idea of what it looks like.

Aside from that practical complaint about the usability and navigation, I feel a wee bit offended on behalf of graphic designers

Their work may not seem as important ideologically, but they’ve been a huge part of the FOSS community’s growth. They’re a poetic counterbalance to corporate GDers - they show how bad the ones working for big salaries at Google or Microsoft are selling out their artistic integrity. Profit dictates they have to make their designs worse for the customer over time so their bosses can sell a contrived solution, while our software only becomes more friendly and polished. That’s why NewPipe keeps getting better and the YouTube app becomes more and more filled with cruft.

This tangent was a little disproportionate to your offhand comment, I’m just feeling sentimental today!

The fun part is that I agree.

So please open PR/MRs on those projects and add Fastlane/Triple-T metadata to their repos with screenshots, so F-Droid has something to show for the next update.

I feel a wee bit offended on behalf of graphic designers

Anyways I’m always open to help with the visual aspect if there’s a demand for it (have done it a couple of times before for other FOSS projects).

Most of them do have screenshots - that part was an example in favour of keeping an option for screenshots, rather than entirely removing them for bandwidth. That’s all

Some people may be misunderstanding the suggestion in the OP. It is NOT that icon and screenshot images are always unimportant or useless. Clearly both text and images have their places and value (more or less, depending on the individual).

The main suggestions are, for each app detail display:

It would be interesting to do a study of f-droid app icons: collect a bunch of app icons, and ask random people to guess what the apps do. I would bet most guesses would be very wrong, but some would come close.