Just noticed that the picture for the Newpipe App contain an add. 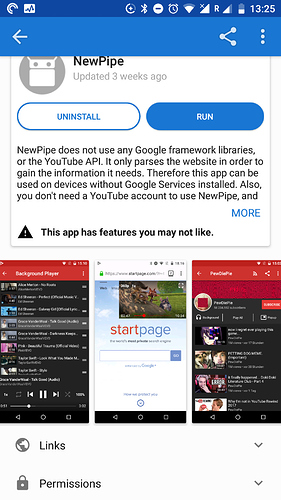 About your actual question, I am not sure if this picture was deliberately introduced as advertisement. I rather believe it is intended to show some feature of the app, namely that it can play videos as a small overlay on other apps or something. When you look at the commit history, you can see that the offending picture had a previous version where you could barely read the name of the search engine. So maybe you can just ask upstream if they produce a more neutral screenshot.

Isn’t that just the banner of that channel?

I don’t see any ad

I thought the fuss is about the second picture, an ad for “startpage”?

The preview picture in the middle? startpage.com How is that related to NewPipe?

The picture seems to indicate that you can watch a video while also browsing other sites. I don’t think they get paid to use startpage as an example.

Hey there.
I am the one who did the screenshot back at NewPipe.
As @anon99929151 already guessed, the screenshot shows that you can do other things like browsing while using the popup player. I chose the starpage site, because of a high contrast to our player so people will recognize it faster. To say this clearly: we didn’t receive any money or anything else from startpage for that screenshot.
Kind regards, Tobias

thanks for the clarification. I didn’t want to accuse you or anybody from the Newpipe-Team of anything. I was just curious.