Notice: This topic doesn’t directly mean open source or Fdroid specifically, but can involve it at times. You can skip some of it if it is too far for some of you and you will still be more protected then before.

The 2 big ways to protect yourself first.

No, not the firewall yet

Open source app store: First thing you should do is download and install an open source appstore like Fdroid to keep getting some of your apps simple and less invasive then say on the Google Play Store. Alot less of the apps track you compared to the amount that do track you on the defualt android app store.

Disable/uninstall preinstalled apps: The big way to protect your privacy without a firewall would be to stop prebuild/invasive apps apps in their tracks. Uninstall/disable apps. Don’t mess with system apps beside any Google related system apps unless you know what you are doing other wise you could mess up your phone to point of needing a factory reset. Trust me I would know. System Google apps are safe to disable if you dont use or dont want them. If you do use google leave them alone.

Okay, now we talk about firewall: Some apps you just can’t disable or uninstall and they will just always run on your phone. Next step would be to then install a firewall to counter most of these apps, like netguard. All it will do is block them/attempt to block specific apps from making a connection while allowing other apps to. You’l have to dig into the settings on Netguard specifically to be able to block system apps as well by defualt it just does user apps.

I’m not gonna go vpn as much, not at all really tbh they are a sollution with new risks tbh. All I would say about it is don’t write any illegal search terms in search boxes or forms online that would make the fbi wantvto keep tabs on you. Keep your messages online in a legal area rather then in an illegal area.

A debloater for stock: 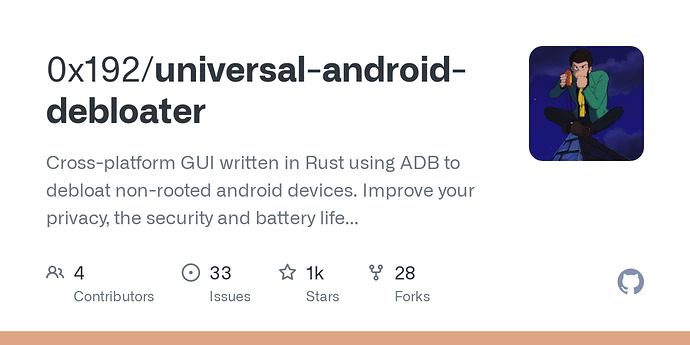 Okay, now we talk about firewall:

Do note their limitations:
https://privacyguides.org/android/ has a good section titled: “INTERNET permission vs packet filtering”

prebuild/invasive apps apps in their tracks.

Agree with most of the suggestions; however, very low level or built-in, hardware-based invasions cannot be removed, practically speaking.

Orbot full-vpn on phone seems to confuse and bother enough websites to convince me it does a good job upsetting a lot of their tracking. Some say don’t login to anything over Tor. Many sites make that difficult to impossible anyway, so that helps enforce that thumb rule.

don’t write any illegal search terms in search boxes or forms online that would make the fbi wantvto keep tabs on you.

Alternatively, assume the 3 letter agencies want to keep tabs on everyone, all the time, is more consistent with reality, at least as publicized. Jan 6 shows they are not much better at Pre-cog (stopping big crime or attacks in advance) in 2021 than they were in 2001, or they choose to allow them to occur… They are pretty good at rounding up the guilty after the fact, using the tracking data etc, however.

Also, IMO you have a human right to learn about anything you wish. It is intent, preparation, or implementing illegal actions that is and should be illegal.

Imagine if everyone searched something suspicious between their “real” searches, or had an add-on that did it automatically, what would that do?

Especially if you have backups to recover important data, as you should.

Orbot full-vpn on phone seems to confuse and bother enough websites to convince me it does a good job upsetting a lot of their tracking. Some say don’t login to anything over Tor. Many sites make that difficult to impossible anyway, so that helps enforce that thumb rul

Mainly don’t log into any site/service such as banking or social media(which if you are serious about privacy you should ignore such things) for example that has your real information as it would defeat the purpose… But i agree on everything else.

I have multiple ROMs of various configurations on multiple devices.
My daily driver, a Moto G5 Plus potter running multiple Nougat ROMs (MultiROM), I’ve been running one setup for some weeks now. LineageOS 14.1 unofficial build which is constantly updated. Though I’m not really a fan of LOS, the fact that it’s updated ( latest build is from November, current security patch is from July 2021) made it the candidate for this setup.

No GApps nor microG. Using UnifiedNlp and location backends. Using IVPN with its hardcore AntiTracker turned on. No access whatsoever to Google and Facebook domains. Also means no Aurora Store or NewPipe use. Not a problem.
Main browser (of two) is Iceraven (based on Firefox) that allows me to use the Privacy Redirect addon. YouTube links are handled by Invidious instances. Same for other things like reddit, twitter, etc.
UntrackeMe Lite is also used for redirects. Rooted so also using AFWall+ and AdAway. App Manager handles any in-app trackers in certain non-FLOSS apps I need.
Nice setup and I haven’t been wanting or felt limited.

The other devices and ROMs (Pie down to KitKat) are either microG or UNlp based. Almost all with InviZible Pro (dnscrypt, TOR, I2P - with or without a separate VPN). All using Bromite WebView. Browsers are usually Privacy Browser, Monocles Browser, Mull, Iceraven, Ungoogled Chromium, Bromite, or SmartCookieWeb-Preview (can also use Privacy Redirect).

Practicing safe computing always (a necessity when running older operating systems, desktop or mobile, never cared for the latest and greatest with their various limitations).

To be clear the issues I have with vpns are, that while they hide you from an isp they can now see your traffic. Additionally a decent amount of so called no log vpns have been debunked and proven to track and/or sell some user data. Essentially you now have to worry about not just the isp but also now the vpn providor finding out things about you.

This is why I say try to stay as legal as posible with your searches and messages but at the ame time get the message you want through. Whether a search, or a text.

Another reason to do vpns other then privacy would be for banking and finances, and if the vpn is trusted to had never been hacked into once ever once then Maybe i’d say use it in that scenario but not for privacy because the vpn could likely be out to get you like your isp, maybe not as bad intentions. Maybe worse intentions. Depends on who controls the vpn in question, but again some of the seemingly safe vpns got busted before but just not all of them yet.

Until I had OP5 I was using my own custom ROMs, which I used to build. Unfortunately now, the LG model I have does not have any option to unlock bootloader. So I am stuck.
BTW, suggest you be careful when you try Graphene, Divest & Calyx. Somehow, I have always felt they keep something out of picture, hidden away. Thankfully, once I tasted the filth in them, I stopped using them.

BTW, suggest you be careful when you try Graphene, Divest & Calyx. Somehow, I have always felt they keep something out of picture, hidden away. Thankfully, once I tasted the filth in them, I stopped using them.

That is very vague and insulting. Care to give any specific details of “filth in them”?

Not vague, neither insulting. If you were yourself on rom building you will understand. Moreover, I do not care to reply to rude commentaries anywhere. I told what I faced few years back. I do not go around keeping proofs over period of time. Hence, “suggest” was used. Period.

It seems to me that the only one who made rude comments was you without even giving a minimum of motivation other than a vague “if you knew what I know, you would understand” which makes you very little credible to me.

That is your thought and I care less over it. As I said, period. Adios.

Thank you to have brought “valuable” and “reasoned” content to the discussion.

Would be grateful to get a better hint of what you mean if possible. Something to help making decisions.

I have seen some ways to uninstall some of the preinstalled bloatware but it seems that you need to root your phone to completly uninstall such.
Do you have any experience with that?
Tips & Tricks?

I already rooted (and derooted) some of my phones, even if i dont fully understand the use of it. But still this might be a solution to get rid of bloatware.

If you have the time and willing to do so, you could install an alternate OS like lineageOS (many devices are native covered, but if not there are many community versions availble, like on the XDA Forums) because these don’t nativly install any bloatware. Any deliver often a better performance on older phones.

If you would need apps that arent anywhere except the playstore, you can try aurorastore with work quite well for me.

adb uninstall ---user 0 appID does disable most apps, even those that you can’t disable from Android Settings

Ok, thats something new for me. I’ll chrck this out asap.

Be careful of what you “uninstall”, I mean those that are SYSTEM, as you might loose functionality.

Try to find an XDA thread about debloating, your specific device/Android version, so you have a base of other people experiences and you know what to expect.

I was thinking about all the Google bloatware, maybe also some Huawei stuff (since i dont use these at all) but that has less priority…

Found some soft of software from google drive. lol