not really. but now i get it…

and thanks for assuming anyway! i didn’t know that would be the only advantage to pay 30 EUR more over an already quite expensive gadget.

so, /e/ can do a few things that fairphone open can’t:

both fairphone and e websites are confusing.

but i’m assuming that e (such a terrible name) can be installed without root on fp3?! that would be very cool! and supposedly easy.

sorry for all the ignorance.

it works on fairphone 3 because open isn’t there yet?!

I would bet that fairphone open won’t arrive on the FP3.

On most devices when you install a non-vendor OS you have to work against the vendor to install it. With FP3 and /e/ (unlike /e/ on other devices) you don’t. Fairphone helps you unlock the bootloader and after the installation it gets locked again (because Fairphone has signed /e/'s images). The process doesn’t use any security holes, but just the standard android rom installing tools adb and fastboot.
It doesn’t have to be repeated on updates. Instead just like previously on Fairephone Open an app tells you about new updates and downloads and reboots after you give your ok.

now it sounds as if there’s really yet no alternative for such simplicity!

BTW if you use /e/, as F-Droid is not installed, it seems they also did not care/want to install the privileged extension that would be necessary for auto-updates. This is the issue to vote for, if you want to change that.

Apart from that there is a new OS called CalyxOS (sorry, for the forum cross-links, but it’s just my English summary of these features) that, as far as I know, has auto-updates for F-Droid as it can even preinstall F-Droid – and microG, optionally though.

Thanks. That OS does sound interesting. After I posted my previous comment I actually installed the privileged extension which is in the /e/ app store. It gets installed without privilege so is totally useless. What I bummer.

lol, so the only alternatives today, really, are basically fp2 and the ones supported by calyxos, pixel phone (plus xiaomi or something)?!

Oh, taht’s interesting did not know that.
But well, if installed and you do have access to the root partition (in old times via TWRP or so), you could likely move that app from /app to /system/app (if I recall the paths correctly) to make it privileged.

Well… you can also use any LineageOS device and flash the privileged extension manually.

flashing anything still looks like much more trouble than i was hoping for.

The first thing I did after installing /e/ was to install f-droid which I use to install the free software apps. As everything was updating automatically I has just happy. From this discussion I now know that it is actually the /e/'s app that is doing the updating from their mirrors. As the apk’s are signed by f-droids key, I can be certain that they are updated by an unmodified version (and not e.g. the version from the original developer in the gplay-store).
I have mixed feelings about this. Though I must say the fact that /e/ includes a non-free maps-app bothers me a lot more.

what do you guys think about the new XDA phone?

sounds very promising to me, despite all the negative comments there! 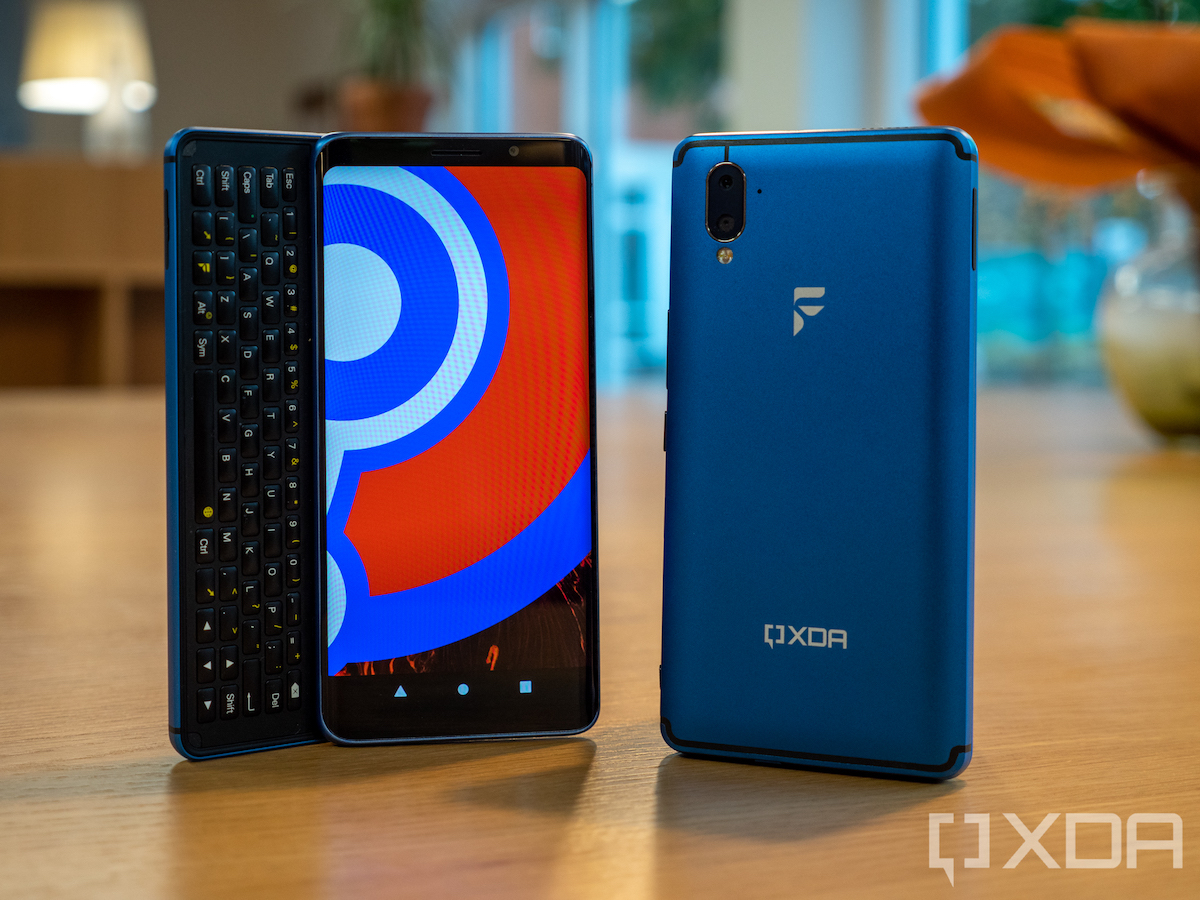 The Pro1-X is XDA's first phone, and it runs on LineageOS or Ubuntu

We here at XDA have collaborated with F(x)tec to bring you our first smartphone. Meet the Pro1-X, a phone that can run LineageOS or Ubuntu.

and despite XDA forums being even worse than discourse, technically.

Sadly Fairphone messed up verified boot on the FP3. Fairphone don’t sign /e/ releases, /e/ use the AOSP test keys. So the process does involve a security hole.

CalyxOS is a great option if you want FDroid privileged extension. The Calyx Institute is a great organisation with a good track record (and F-Droid developers doing work for them). The cost of the Pixel a series phones has been dropping and the guaranteed 3 year + of full monthly security updates makes them very price competitive with other phone vendors, over their updated lifetime.

As LineageOS (and other custom ROMS) are soon to adopt the marvelous seedvault backup app, for which Calyx have been funding a load of great development work, it will become much easier moving to different OSs.

strictly speaking of software, that may make some sense… but i’m not giving google any single cent anymore.

Read a bit about your experience with Google, sounds terrible. You may be happy to hear that CalyxOS supports the Xiaomi A2, which can be picked up pretty cheap now. I flashed one for a friend and it works well.

Google do sell pretty good phones, the pricing of the Pixel ‘a’ phones makes them very competitive, considering quality and length of time they’ll recieve full security updates. Unlike most other phone manufacturers they put a lot of effort into doing things right (as they are kind of the reference devices for Android, I guess they have to). Even go to the extra effort of making sure they properly support alternative operating systems with full device security features.

The Mi A2 is one of a few other devices that does this, and like many of the others they haven’t totally got things right.

Calyx are looking to support a new cheap non-Google phone that will give them working verified boot. If anyone has any info on suitable devices they’d be happy to hear. They are also planning support for super budget Android Go phones, that don’t even have verified boot on the stock operating system.

thanks. it was terrible! that’s just the tip of the iceberg, though.

i’m deleting everything from unsustainable sources. it goes a very long way, down to moving away from the cities. ahoxus.org if you want to read a lot more.

don’t really care how much google may seem like good engineering, it’s all wrong in too many directions, and got no need to support all this uncalculated evil.

got no idea about xiaomi, but i doubt they’re any different.

how about the pine phone?

also, i read this whole topic and a few more on graphene from it:

Talking about privacy against GrapheneOS costed me a ban in reddit… This is by far the most secure Android ROM. I completely agree with that. However, it has a lot of automatic connections with Google. Daniel says, be in the crowd but that statement seems a mistake. Google will know your device exists, that it runs Android and some basic information about it. Sorry! But for me automatic connections means no privacy whatever Daniel or other people may say. BTW, you could avoid them with NetGu…

it came to me that i might, after all, be convinced to pay google for a pixel, given:

and it came to me, that is the main key point: sustainability.

i couldn’t care more for privacy, but that lead me to unconventional wisdom which shortened to an extreme says: fuck privacy.

except when it comes to digital privacy, often confused by its other name, security (as used in the other topic). that’s indeed crucial, but the ultimate security? backups done right. which means, in a similar way: fuck security (mostly).

i just need a sustainable phone. and the best way to assure it is, is the high facility to maintain it for as long as possible.

which leads me back to the fairphone, probably…

perhaps i will soon update the op to reflect all this, in case nobody objects.

and after reading a couple more interesting topics on my pine phone search which i still haven’t read:

Phones ideal for F-Droid and is Android Go, F-Droid compatible?

I wonder, has ANY manufacturer stepped forward to voice support for F-Droid? Apart from Pine64? As for liability of list, I do not see the harm in users stating, “I have phone so-and-so and my experience with F-Droid is as follows…”. This list would be user-list driven. Not all solutions require additional funding. What is the liability in users stating her experiences?

Are there smartphones with open source firmware?

I think the Pinephone works with FOSS firmware as well

Hi All, I’m using /e/os from e os fundation, which a fork of Lineage OS and aim to keep me out from Grooogle spy. It works well fluid and well designed. The main brain is the old mandrake/mandriva developer chief and it requires not so many tech competencies as in the other ROMs.

ROM is up to date with latest Android and security patches.

For app I’m using their Fdroid + e os app store + Aurora. Unfortunately for daily life I have to use some apps and mix stores.

Do you have any experiences with E OS? Privacy looks OK but safety/security? Is there a way to check about security’s bugs or backdoor?

Below is a link to a previous, critical summary by a different developer. DivestOS also comes with F-Droid privileged extension for auto updates without root. With only the part of microg needed for location. If you “need” proprietary apps and google services (full microg), then you should just install LineageOS with gapps, and stop fooling yourself about being degoogled. Then there’s the fact that the “main brain” chief of E os was caught using sockpuppets to manipulate Wikipedia, while criticizing others for using pseudonyms…

Full disclosure I am the sole developer of DivestOS. Take everything I say below with a grain of salt, I don’t care to devote enough time to extensively research projects like /e/ enough. /e/ includes a proprietary maps app. /e/ has a weather app that performs requests over HTTP, despite simply being a fork of Good Weather which I myself added HTTPS support to… in 2017: https://github.com/qqq3/good-weather/pull/41 /e/ ships userdebug builds /e/ only provides verified boot on 1 device (fp3) as…

Reading https://gbatemp.net/threads/android-f-droid-classic-and-the-new-privileged-extension.583129/ I could use F-Droid Classic and that modified Priviledge Ext without root, just by setting up via ADB, installed from their repo: https://git.bubu1.eu/Bubu/fdroidclassic

FYI how to uninstall: adb shell am start -n eu.bubu1.privext/org.fdroid.fdroid.privileged.ui.UnregisterDialog and confirm the dialog that opens on the device.