What happened to the effort by Mozilla to put build flags to all proprietary libraries to make it possible for f-droid to include it?
When that will be ready, is it gonna replace this build?

What happened to the effort by Mozilla to put build flags to all proprietary libraries to make it possible for f-droid to include it?

Are you talking about flags mentioned in https://github.com/mozilla-mobile/fenix/issues/162? That wasn’t Mozilla.

When that will be ready, is it gonna replace this build?

It’s on hold now (read the comments). Not sure what you mean by “replacing this build.”

If the question is “whether the upstream Firefox for Android will ever become free software”, I personally don’t believe that. Of course there are people at Mozilla who share free software values (they even helped us in the past), but Mozilla as a company is quite hostile to those values.

@relan Yet I have one question : do Mozilla Firefox account/sync still work ?
Indeed, I use it frequently to send tabs do other devices, and I think I currently cannot do without it !

but Mozilla as a company is quite hostile to those values.

Mozilla is not hostile to Free software, it’s just not friendly to free software as we want. Microsoft is or was hostile to free software. Mozilla publishes code for everything it builds, it just does not remove some stuff that we don’t like. Hostile is a strong word.

Not all of them. Only a very limited list (I don’t currently have a link handy, sorry) of addons is currently supported. More will follow in the future I think.

It will be beta on 20nd of October and stable on 17th of November. The fdroid project might need to patch stable to get this feature since it’s not planned for stable.

@relan Both abi versions of fennec are available now and seem to be working fine. Would you update the description and bump the CV?

(Also the maintainer notes would probably need some update as well, but that is not user facing so can happen whenever)

Does this version of Firefox have DNS over Https? I can’t find it.

Also, is there a way to prevent the address bar from being hidden when scrolling?

Thank you for updating Fennec, I like this version

You need to enable it in about:config. E.g. network.trr.mode

I checked earlier but there’s no such option in about:config

Does this version of Firefox have DNS over Https? I can’t find it.

Why/User Benefit/User Problem As a user i want to Protect myself while browsing the web From Man-in-the-middle attack and make sure Attackers...

Also, is there a way to prevent the address bar from being hidden when scrolling? 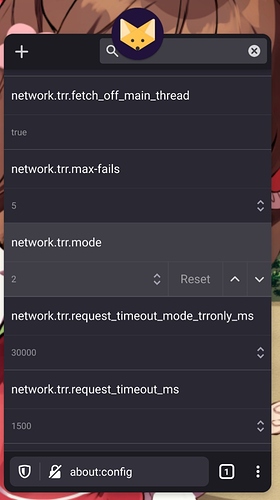 okay im so dumb,nvm. Thanks

I encounter an issue. When I play video in Fennec it crashes regular. I didn’t see this issue in Firefox and Chromium. It happens about once ten minates.

Could you file a bug with logcat at https://gitlab.com/relan/fennecbuild/-/issues?

FWIW, downgrading to 68 via adb install -r -d org.mozilla.fennec_fdroid_689420.apk mostly works. Cookies have been lost in the process, but open tabs, bookmarks, extensions have not. Didn’t check other data closely.

I was expecting I would break it completely, to be honest.

“Wait Until First Paint To Show Page Content” setting will be available in Fennec F-Droid 81.1.3.