Should outdated apps be moved to the archive?

I’m very happy with F-Droid and the way it allows me to run my system with almost exclusively open source apps and for this reason I’ve recommended it to a few privacy conscious people I know.

However this hasn’t always gone so smoothly and one of the biggest issue they have run into is installing an outdated app that looks severely outdated or doesn’t even work at all on current versions of Android.

For example there are a few severely outdated apps for Cyanogenmod on F-Droid: https://search.f-droid.org/?q=cyanogenmod&lang=en
There is this ancient Duck Duck Go App for Android 1.6: https://f-droid.org/en/packages/se.johanhil.duckduckgo/
But even some more recent apps don’t work on Android 10 anymore like Net Monitor: https://f-droid.org/en/packages/org.secuso.privacyfriendlynetmonitor/
There are a lot of privacy enhancements in Android 10 and apps can no longer see network activity without being the active VPN app.

Overall there are a lot of obsolete and broken apps in F-Droid and this was frustrating to some people I recommended F-Droid to. I had to remind them to look at the release date of each app and to stay away from apps more than 3-4 years old.

It seems like Google Play is also suffering from this problem and they are trying to remedy this by forcing developers to compile updates and new apps against the new API level within 1-2 years of a new Android release. In addition Android 10 displays a warning when you start an app designed for Android 5.1 or older for the first time: https://developer.android.com/about/versions/10/behavior-changes-all#low-target-sdk-warnings

Coincidentally Android 5.1 was the final version of Android not to use runtime permissions so users get a warning whenever they start an app that could posses some dangerous permissions by default.

I’m wondering if it would make sense to use this as a baseline and move all apps not designed for Android 6 AND apps that are not working on the latest version of Android to the archive? Interested users could still install the apps from there but everyone else would get a better experience.

What do you think about this?

Depends, is the app broken for ALL (most) versions? How much of the market is on 10?

You can open an issue on fdroiddata, detailing the apps and the reasons, so we can double check.

As far as Net Monitor is concerned, the app only works on legacy versions of Android. Android 10 restricts access to /proc/net to increase user privacy. The app would have to be completely redesigned to work using the VPN API.

As you can see in the Google Play Store users are frustrated with this fact and the app has gotten a lot of bad reviews lately: https://play.google.com/store/apps/details?id=org.secuso.privacyfriendlynetmonitorapp&hl=de&showAllReviews=true

F-Droid users are facing the same exact issue. A lot of other outdated apps provide a similar subpar user experience even if they aren’t completely broken. Most really old apps on F-Droid don’t follow modern design or usability standards and upon starting a legacy app, users are greeted with the error message mentioned above.

In my opinion Net Monitor and other outdated apps should be moved to the archive for this reason. F-Droid already has modern alternatives for almost all affected apps. For example if users want to monitor network usage, they could use something like NetGuard Pro with its logging feature.

If you want to, I can open an issue on fdroiddata but this issue isn’t about a few apps, it’s about keeping the app directory on F-Droid interesting, functional and healthy.

If you want to, I can open an issue on fdroiddata but this issue isn’t about a few apps, it’s about keeping the app directory on F-Droid interesting, functional and healthy

This issue is about humans maintaining the repo actually… so do join the effort and continue to do it.

I’m new to FDroid and from the get go everything you said is true.
Don’t get me wrong, as long as google is less in my devices, I’m all right.
So, I’m not complaining, but there is definitely apps that I Uninstall with in the hour for the reasons you mentioned.

I’m hoping for new employment in the near future so then I can maybe start shelling out some $ to FDroid, then maybe they can get to the bottom of some these issues.

Okay, I have opened an issue on fdroiddata for Net Monitor: https://gitlab.com/fdroid/fdroiddata/-/issues/2134

Any additional opinions on the many other outdated apps?

Edit: Another issue I just realized is that Android 10 removed support for the menu button. The menu button was deprecated with Android 3 and finally removed a year ago: https://www.xda-developers.com/rip-menu-button-android-10-drops-legacy-support-extremely-old-apps/

Some ancient apps still rely on this button, for example DAAP on F-Droid: https://f-droid.org/en/packages/org.mult.daap/

This is how the app is supposed to look with the menu open on my old Android 9 tablet: 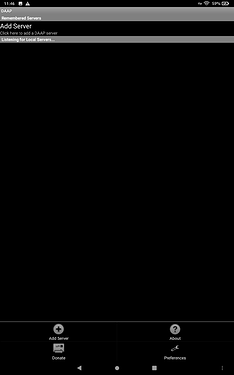 And this is how it looks on my Pixel 3a with Android 10:

This means that the settings are inaccessible.

I think we should archive broken apps. I think it is too soon to archive an app because it doesn’t work on Android 10, that’s a tiny fraction of the user base. But soon, I guess