I downloaded Riot from f-droid. It has no antifeatures tagged, but when signing up, it asks for a Google Recaptcha. 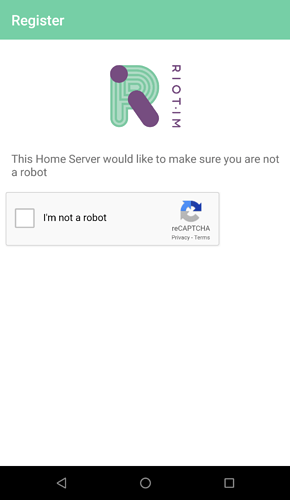 Shouldn’t this be flagged, at least, with promoting non-free services?

The google captcha is not part of riot itself, but rather a choice by the server you’re registering an account on. Most public matrix server probably have some form of captcha, but not all matrix server have one, and if you host your own server you’ll have a choice whether or not you want to have a captcha to prevent mass signup.

As such there is no recaptcha code in riot itself, nor in the server, though the server does allow the server admin to hook up to google recaptcha.

The google captcha is not part of riot itself, but rather a choice by the server you’re registering an account on.

Yes, I understand, and of course you’re right. The point is that the server is the default one in the app, the one used if you do not specify any. The captcha is not part of Riot itself, but Riot is promoting it a bit, as it is part of the default configuration.

if you host your own server you’ll have a choice whether or not you want to have a captcha to prevent mass signup.

There are also privacy and freedom respectful captchas and other ways to prevent massive signup.

Anyway, I thought it was something missed that fitted in an antifeature, but it seems that you are right and it isn’t, as a dev liked your answer. I understand that the question of where to put the limit is not trivial, so I’ll stick to dev preferences regarding this.

I will mark this as solved, then. Thanks for your time!

This has made me think of something related though. Riot Android is hooked up with the New Vector integration manager (scalar) which is not open source.

There exist an open source implementation for this (https://github.com/turt2live/matrix-dimension/) but afaik it’s not possible currently to switch this in riot-android.

I’ll see if this can be changed for the next release or if we should indeed mark this with NonFreeNet for now.

Did you discuss it with Matrix staff? Just to be safe before announcing Matrix non-free?

yeah, I think it got renamed at some point…

Sounds like it deserves NonFreeNet to me. I think it would be good to notify the authors, but I don’t think we need them to review it before tagging Riot with NonFreeNet. The combo of the google captcha by default and that integration server, if both are confirmed, make the case clear.

It seems that there are different opinions between devs, so I remove the “solved” mark.

As I said before, I understand that there is no clear limit about when to put the antifeature tag, but I want to say that I agree with hans: I think they deserve it if it’s something that you cannot avoid if using default options.

Sounds like @Bubu’s point about the integration server is enough to mark it with NonFreeNet. Then the Captcha is a separate issue.