How do I get an app added?

Hi,
I sent a PR to the F-Droid data repo to add an app I made, but nobody checked it after 3 weeks. Last time I added an app it only took a few hours, did something change?

This is the PR: https://gitlab.com/fdroid/fdroiddata/merge_requests/3766

How do I get an app added?

First of all, build it via fdroid build. I usually ignore those MR where authors didn’t bother to check that.

but nobody checked it after 3 weeks. Last time I added an app it only took a few hours,

is debian a mandatory for MRs ?

Nope, works on Ubunut too, at least…

Build server is 64bit, any reason for 32? 32 is kinda obsolete everywhere

what can be processed with Arch distro

You check out and tell us. I git clone fdroiddata & fdroidserver, so you don’t need prepackaged distro specific things.

But, depending on your app, if say you’re doing make NDK build tools (or whatever was that command) that balloons to 2.5-3Gb easy, plus gradle deps downloaded, plus android build tools another 100Mb

Vagrant is needed only if you want to run builds in an isolated environment, like the one used on the official build server.

You can just clone fdroiddata, fdroidserver and run fdroid build your.app.id directly on your host system (any GNU/Linux distro is fine, not sure about 32-bit ones, though).

You can just clone fdroiddata, fdroidserver and run fdroid build your.app.id directly on your host system (any GNU/Linux distro is fine, not sure about 32-bit ones, though).

I guess only fdroiddata[project_members] can push a local /fdroiddata ? So what the use for basic F-Droid users to pre-test fdroid build your.app.id ?

@Licaon_Kter I still don’t get Create new merge request by email ; is this the GUI you are referring to ? 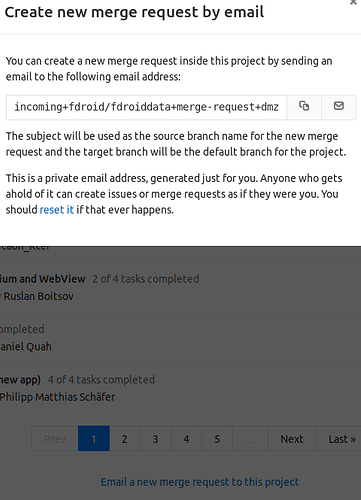 I would like to see the Keybase app added. I’m brand new to smartphones (don’t ask…), I object strongly to all the google apps that try to strong-arm their way into my personal data so I refuse to sign up for and use Google Play - I’m left with whatever F-Droid supports or whatever I can download and install manually… Trouble is every second app I try to install that way doesn’t work properly. https://keybase.io/download

Add your voice here, but that won’t speed it up: https://gitlab.com/fdroid/rfp/issues/191

Yes, only members PUSH, you want to open a MERGE REQUEST from your BRACH to fdroid/fdroiddata