Why is so outdated?

It had an update a few days ago and many others before that: https://f-droid.org/en/packages/com.duckduckgo.mobile.android/

Either you haven’t refreshed your repos or you installed it from another source.

I believe I installed from f-droid years ago, but as I have google-play, maybe I updated this version from google-play.

Is there a way to upgrade my duckduckgo from f-droid without uninstalled? I have a lot of bookmarks and I would not like to loose them.

Anyway in my f-droid app I can see only this old version. I believe my repositories are updated. I have been getting f-droid update notifications for other apps quite often. 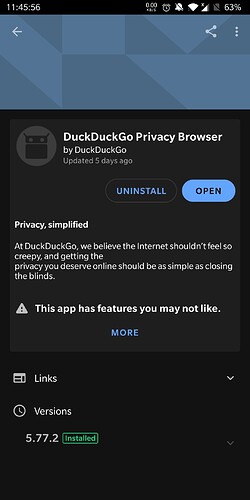 In the screenshot I attached you can see “updated 5 days ago”, while in the version list is still only this only version.

I have just updated the app via google-play. With the latest version I can export bookmarks. So I will export them and re-installed the app from f-droid.
I thought I could update the app either from f-droid and google-play.

I thought I could update the app either from f-droid and google-play.

Nope, that’s a security feature, eg. nobody can update your app to one that has malware inside